We are using our own cookies and third parties cookies to improve our services and show you advertisments related to your preferences through a process of analysis of your browsing experience. More information here

25/10/2016
Dario Mesonero -Romanos was born in Madrid in March 1958. Since he was a kid he was always attracted by nature and more specially by wild animals. 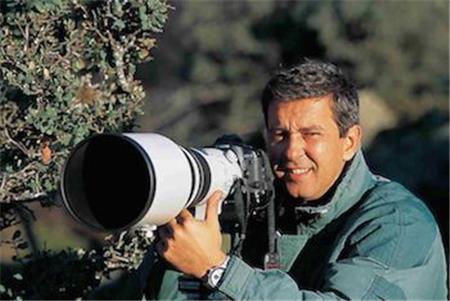 Dario Mesonero -Romanos was born in Madrid in March 1958. Since he was a kid he was always attracted by nature and more specially by wild animals.

Married and with three kids, currently he is a serious amateur photographer that spends as much time as possible travelling and taking pictures. His passion is nature and travelling and has been doing this for the last 30 years, eventhough really seriously during the last five years. A big part of his work has been done in analogic, like all his African trips during the 90`s.

Never gone into competitions but had the opportunity to publish 4 coffee table books, distributed all around Europe and some African countries:
-TIERRA VIVA

-THE GREAT RIFT VALLEY
-THE OLD AND WILD CONTINENT
-THE GALAPAGOS ISLANDS
Working since the begining with Canon Equipment, currently he has a Canon EOS-1DX, Canon 300F.2.8 and Canon 500F:4 as main lenses.

He manages his own web: www.dmrwildphoto.com were he publishes his photos.
Given some presentations on high speed photography, last one in the Natural History musseum in Madrid

He really enjoys this activity and is always looking for new places as far as his other responsabilities allow him to do it.